One of Us is Lying by Karen M.McManus 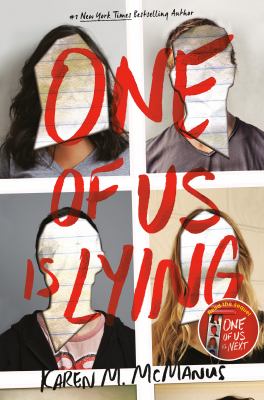 One of Us is Lying by Karen M.McManus

One of Us is Lying

On Monday afternoon, five strangers at Bayview High walk into detention – Bronwyn, Addy, Cooper, Nate, and Simon. Before the end of detention, Simon was dead. The investigators say his death wasn’t an accident. On Tuesday, Simon posts and reveals juicy news about all four of his popular classmates on the Bayview’s gossip app that he created, “About That”, making four of them the suspects in his murder.

This book is much more than just a murder story, in terms of character development, diversity, and expanding the plot. The characters fall under the high school stereotypes of the brains, the beauty, the jock, the criminal, and the outcast, but they all change and breakthrough these roles as their deepest secrets spread in Bayview High. Speaking about myself, I did not like some of the characters at the beginning of the story. Though, near the end, I grew to love them all. (Nate was always my favorite!)

In the story, you will also witness both major and minor characters develop romance, drama, and friendship. Every emotion is there; I laughed, related, pitied, and even screamed in surprise. Regardless of whether or not I solved the mystery before it was revealed, I was very hooked on this book and had to finish the book to see how the characters would end up after the journey. Definitely, a must-read for thriller, drama, and plot twists fans. Pay close attention and you might solve the mystery!