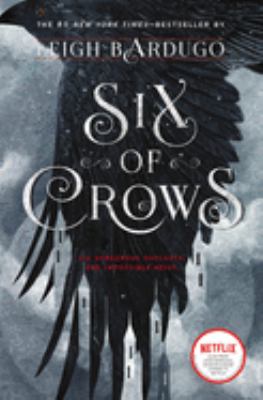 Six of Crow by Leigh Bardugo is an insanely hyped up book. Since hype has a tendency to go extremely wrong, I was skeptical, but excited nevertheless. After reading through the decent but not that brilliant Shadow and Bone trilogy, which comes before Six of Crows, I had faith in Leigh Bardugo’s writing style. And I was blown away. So much so, that I basically sat in the same spot for a few days and read through the entire duology. And loved it. It has everything I love: wonderfully written characters, an amazing found family and an absolutely crazy plot.

How often have you read a series that not a single character feels underdeveloped. Well, I just finished a book series that was exactly like that. Kaz, the mastermind, was scammed as a child, witnessed his brother’s death and then proceeded to dedicate his life to revenge against that man who scammed him. Inej, the spy known as the Wraith, was sold to human trafficking when she was young, went though literal hell, but still remains faithful to her saints. Jesper, the sharpshooter, has a gambling addiction but still manages to be a great friend. Nina, the heartrender, was kidnapped on a mission and now uses her magic to survive. Matthias, the ex-soldier, who spends the majority of the series unlearning cult mentalities. And Wylan, the runaway, who was kicked out by his dad for not being able to read (due to dyslexia).

Despite all of these characters being insanely developed at the beginning of the series, through the course of the series, they each go through their own development arc. No one character is prioritized over another, and that is such an amazing thing. To add on to that, each crow has an amazing relationship with the others. And no, I am not just talking about romantic relationships (which were all done perfectly, in my ever so humble opinion). Moreover, each character has their own motivation beyond their romantic subplot.

The plot consists of multiple heights that are all plotted by the group’s mastermind, Kaz Brekker. Not only are the audience guessing at what is going to happen next, but the majority of the characters themselves. The plot twists are also incredibly well executed, many of which left me screaming in surprise. Even so, we are reminded that these characters are teenagers, despite all they had to through. The dark scenes are balanced out by more lighthearted scenes in ways that make the reader care so deeply about each and every character’s wellbeing.

If you are prepared to laugh, cry, gasp, scream and then lay flat on your back for at least an hour after finishing, then I recommend these books to you. Even though you have to read the original Shadow and Bone trilogy beforehand, it is totally worth it. I didn’t even mention how political intrigue and wonderful worldbuilding fit into this fantastic series! There is almost too much to say about this book to properly review! I hope that this relatively useless review convinced you to drop everything and pick up this book.