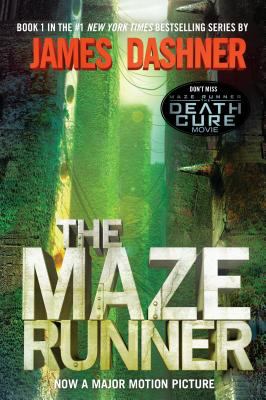 During my time reading, I learned that young adult dystopian novels either have social commentary or they are just “government bad, kids in rebellion good”. Unfortunately, this series fits in the later category of dystopian novels. This book had the potential to be very, very intriguing, due to the interesting concept and fast paced plot. However, due to the poor writing and lacking characters, this book did not live up to its potential.

The book starts with our protagonist Thomas waking up in a metal box and being delivered to a strange society made up solely of teen boys. It turns out that outside the walls of that strange society, there are monsters prowling and waiting to attack those very boys. There are many questions that this concept raises, like “why are they here?”, “what are those monsters?”, “where are the girls?”, “who put them?”, “how are they going to get out?” and “what is the rest of the world like?”. But the answers to these questions were all disappointing, due to the poor writing and poor planning.

So apparently the whole thing was an experiment in order to find a cure to an apocalyptic disease that those boys were immune to. Also the boys and girls were separated in the experiment (in order to explain the author’s lack of ability to write female characters). And an organization called WICKED was behind everything. And there’s telepathy too. And a memory wipe that causes people to make up their own swear words. It makes even less sense in context.

And the characters are pretty much the worst part. Thomas is an insufferable protagonist. He is practically impossible to describe since he has literally no characterization. And the rest is a simple matter of telling instead of showing. We are told that Minho is brave, Alby is wise, Newt is caring and Chuck is like a little brother to Thomas, but we are never shown anything that supports that. We barely get to see any character in action besides Thomas (and he barely does anything) and Thomas spends far too much time hating on Chuck to look like an older brother figure. But my biggest complaint is with Teresa. She is the sole female character in the book and she is only ever described with flimsy adjectives like “very pretty”, “super smart” and “so strong”. And she spends the majority of the novel in a coma. And she is Thomas’s love interest. And due to her interesting backstory, she was the character with the most potential, but she is always made secondary to Thomas.

This book had a lot of potential and used almost none of it, like Teresa’s character, and it frustrates me to no end. If you enjoyed this book, I am glad that you were able to find joy in this, but unfortunately I couldn’t, due to my multitude of reasons.