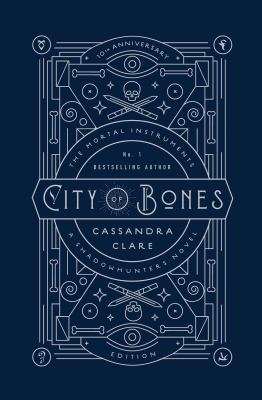 The Mortal Instruments is the first installment in Cassandra Clare’s phenomenally long Shadowhunter Chronicles. The entirety of the chronicles is super hyped up online, so I decided to give it a chance. However, I have to say I was quite underwhelmed. I did not enjoy the series nearly as much as I thought I would. While the worldbuilding and magic system was decent, I have problems with the characters and the romantic relationships of the series.

I’m going to start with what I actually enjoyed about the series. The world was interesting and it was quite fun to see how the Shadow World interacted with the normal world. Even if it was built in timely infodumps, I still enjoyed the complexities of the world and its inhabitants. I found the inclusion of practically every single fantasy creature quite fun, even if many people disagree with that. There were also many laugh out loud lines that I still remember to this day (like the one about the cat from the Smurfs). The world and the humor was almost enough for me to want to continue with the sequels and prequels. But almost isn’t enough.

The characters were utterly lackluster. Clary, our main protagonist, was very insufferable. She was set up to be a sort of, tomboy, feminist, cool girl, most likable main character ever, but she just came off as a bit of a brat. She doesn’t have any real flaws that she develops out of, she doesn’t have much of a character arc at all and worst of all, she was “not like other girls”. Her love interest, Jace, isn’t much better. Even though he is one of the most developed, his trauma is never fully explored, nor the way he copes, other than the fact that he is a jerk to everyone other than Clary. Alec, Isabelle, Magnus and Simon were mostly spared due to the fact that they barely had any development at all. Alec’s supposed ‘goodness’ was always told and never shown (and the few times he does do anything completely contradicts what we were told). Isabelle was set up to be a contrast to Clary, she was all the “other girls”, that Clary wasn’t, even though Isabelle was more interesting that Clary. Magnus was mostly alright in the beginning, but most of his problems came with his romantic relationship with Alec. Simon was practically just a comic relief best friend for Clary until the fourth book when he was almost given character development, yet he was still the best character in the series.

With lackluster characters comes lackluster romance (and of course everyone gets a romantic interest. It seems that it would absolutely kill the writer to leave any character single). Clary and Jace have many instances where their relationship looks unhealthy. Clary has issues with confronting Jace when she thinks that he isn’t treating her right, brushing it off as him loving her too much for both their own goods. Every moment of their relationship is so dramatic that it’s cringe-worthy. Alec and Magnus’s relationship is hailed as the best thing ever, both in universe and in the fandom. However, it’s really not. When they entered the relationship, Magnus is a centuries old immortal warlock and Alec is a closeted Shadowhunter teen. At one point, Magnus pressures Alec to come out to his homophobic family. In another instance, Alec conspired with one of Magnus’s toxic ex to take away his immortality. Not quite so picture perfect. Simon and Isabelle are barely developed, so their romantic relationship was built on nothing. But their relationship was the least toxic, and that’s saying a lot, since there was a cheating subplot. Honestly, for a woman who writes primarily romantic stories, I’m surprised that Cassandra Clare doesn’t know how a healthy relationship works.

Honestly, how I managed to read all six books of this series is a mystery to myself. How I managed to put up with the cardboard characters and wooden romances baffles me at the moment. Maybe it was the worldbuilding and magic system. Maybe it was the occasional laugh out loud line (upon further research, it turns out that many of those were plagiarized). Do I recommend these books to someone wanting a funny, easy to read series? Maybe. But do I recommend these books to anyone looking for wonderful characters and romances? Absolutely not.