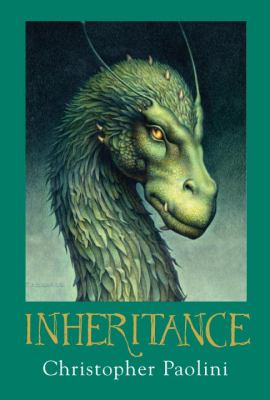 Inheritance is the fourth and last book in the Inheritance Cycle and was written by Christopher Paolini. The book starts out with the Varden attacking a city under the evil king, Galbatorix’s control. They manage to take the city and also establish an alliance with werecats, which are cats that can change into a human form. Roran, Eragon’s cousin, goes to another city, Aroughs, to help capture it. After capturing the city, he heads to Dras-Leona, where the Varden already is. Due to Dras-Leona being the last obstacle between the Varden and the king, Eragon’s half brother and Dragon Rider, Murtagh, is defending it. The Varden discovers a system of tunnels underneath Dras-Leona and sends a small group consisting of Eragon, two elves namely Wyrden and Arya, a werecat, and a strange woman named Angela. However, they are attacked and Wyrden dies. Eragon and Arya are captured while Angela and the werecat are thought dead. However, Angela and the werecat help break them out and the Varden takes the city. In the evening, Murtagh and his dragon capture the leader of the Varden and take her to the capital, Urû’baen. Eragon is in dire need of power, as he can’t defeat Murtagh, and Galbatorix is way out of his league. He remembers some advice that the werecat from earlier gave him back in the first book, so he goes with his dragon and an eldunari, which is the soul of a dragon inside of a clear stone-like object. They arrive at the place where the werecat told them to go, and they find even more eldunari, so they are much more powerful. They also find a great amount of dragon eggs, which is good as it was previously thought that there were only 3 dragons and 1 egg left, so the dragons are saved. Eragon flies back, and the Varden is gearing up to attack Urû’baen. They attack, and Eragon kills the king after a sword match with Murtagh. Murtagh gives Eragon his eldunari, and leaves to go on an adventure. They save the leader of the Varden, who becomes the leader of the country, and Eragon leaves the land to protect the dragons from harm.

Inheritance is a great finale for the series, and shows both Eragon and Paolini’s growth over the course of the series. Eragon, though a good book, was still filled with cliches and somewhat predictable writing. Inheritance, on the other hand, is a masterpiece compared to it, filled with unpredictable yet great writing, and subtle foreshadowing. Inheritance is an amazing book and I definitely recommend this for your next read.