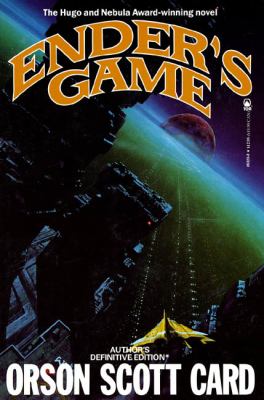 Ender’s Game is a science fiction novel written by Orson Scott Card on January 15, 1985. Since its publication, Ender’s Game has been translated into 34 languages. It was also recognized as the best science fiction novel by the Nebula and the Hugo awards.
The plot takes place at an unspecified time in the future, and most of the novel takes place at Battle School and Command School. The main character, Ender Wiggin, begins the story when he is six and ends it when he is thirteen. Battle School was a massive space station in Earth’s orbit, which had multiple classrooms, sleeping quarters separated by group, and a massive battle room. Battle rooms were large, zero-gravity, square-shaped rooms with two gates where two opposing armies began battles. Command school was located on an asteroid and consisted of long, winding underground tunnels created by aliens. It was intended as an army training facility.
Ender’s Game starts 50 years after an alien invasion, with Ender brutally, mercilessly, and relentlessly beating up the leader of a gang of bullies to defend himself. Ender gets questioned by Colonel Graff, a member of the International Fleet, about the incident, and he urges Ender to join him at Battle School to defend the Earth from aliens because he showed promise. Ender makes a lot of friends at Battle School, begins adjusting to zero gravity, and gets abruptly promoted to the Salamander Army. Though making some friends in the Salamander Army, Ender accidentally crosses the Bonzo, the army’s leader, and gets traded to the Rat Army. Ender slowly climbs the ranks and gets promoted numerous times. While Ender gains support from other students, Peter and Valentine, his siblings, try to take over the world. Ender is soon made the commander of the Dragon Army and begins to train his recruits. After winning many games, he gets promoted to Command School, and Colonel Graff takes Ender to the International Fleet’s secret base. Colonel Graff tricks Ender into destroying an alien race by disguising real battles against the aliens as simulated battles.
Unlike most others, I did not enjoy reading Ender’s Game. Most of the characters serve little to no purpose in the plot, and nothing would change if you cut them entirely out of the story. If you were to remove the side plot with Ender’s siblings, the story would not change at all. None of the characters in the book are likable. I found the worldbuilding in the story to be good, though. I wouldn’t recommend this book to people who are sensitive to violence or strong language.
Register for Summer Reading! For all ages!