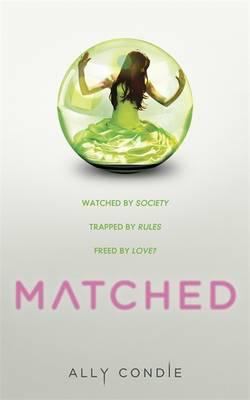 Matched by Ally Condie is the first book of the Matched series that describes the struggles of the main character, Cassia in a dystopian world. In this world, or “City” as the author so aptly named it, is run by the “Society” (once again so aptly named) where all decisions are made for its citizens such as occupation and spouse. All citizens once they reach a certain age are matched to a single person, but Cassia had two faces appear on the screen, introducing a love triangle between her best friend and a stranger: Xander and Ky. But not only that, Ky is an Aberration, or someone whose parents have gotten an Infraction. An Infraction is when the parents have broken the law; because of this, Ky is also punished and labeled as an Aberration, despite not having broken the law set by the Society before. The entire book then follows the journey of Cassia as she learns to break out of the control set by the Society with the help of Ky.

Do not read this book. This book has caused me physical pain from not only the slow pacing but also because of the unnecessary love triangle that echoes the worst parts of the love triangle in Hunger Games. The Giver by Lois Lowry has done it much better in terms of world building and in following the character’s journey to questioning the rules set by those in power. Instead of being spoon fed how flawed the world is much like Ky has for Cassia, Jonas pieces it together for himself through the memories he gains from the Giver. Cassia is a boring character due to how flawless she is, when the flaws of the character are what leads to interesting conflicts. She does not grow at all throughout this book and remains stagnant and robotic. But most of my frustrations with this book is with the aforementioned love triangle. The author does not try to do anything new with the concept of a love triangle and goes with the cliche bad boy vs. childhood best friend. There was potential in having Ky represent freedom from the Society in comparison to Xander and complacency with the Society, but not much is done with this concept and the focus is more with the romance. I would have been fine with his book if it was purely just romance, but because it is a dystopia, I was left expecting much more than a cliche teen romance that already oversaturated the teen dystopian genre.

My verdict overall is to skip this book and keep to the Hunger Games or The Giver. Both books have much better pacing, narration, and a message beyond “oh having your every major decision made is bad” or “love should be free”